For the first time in a long while, I put together real tot trays for Caden and had them on the shelves all week. This weeks themes were leaves, the letter L and the color yellow. A couple of the trays were a hit with Caden and a couple of them were not. And it seems like the trays that I put the most work into Caden was not interested in, go figure.

The yellow bin was a hit. Caden enjoyed dumping out the contents and playing with the yellow pom poms. He would fill up a container with them, dump them out and repeat. 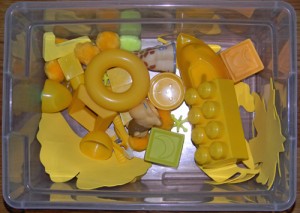 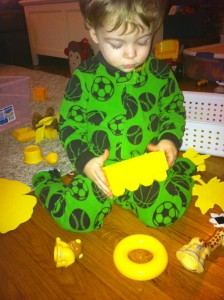 Caden also enjoyed playing with the autumn sensory bin which I had put away for the week of Halloween. He never noticed it was gone, but he sure did notice when it reappeared! He added his construction vehicles, and played with the black beans. 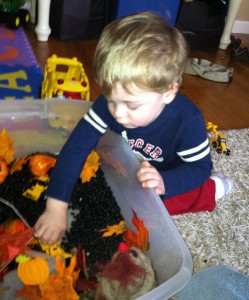 I also brought back the acorn sorting tray. He took it off the shelf one afternoon and began to play with it. He attempted to use the tweezers to pick up the acorns and put them into the ice-cube tray. These tweezers aren’t really great for picking up round objects, but he gets the idea. 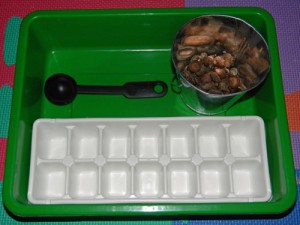 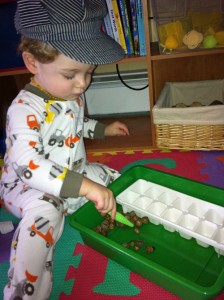 Despite my best efforts Caden wasn’t interested in playing a leaf matching tray that I had set out, or the letter L lacing tray. Usually Caden will try the matching game, but I guess he just wasn’t into this one. He also tried the lacing letter, but I think it was too difficult for him. I think he would do better with a stiffer object instead of a laminated piece of cardstock to lace and a shoelace instead of a string of yarn with the end taped. Both of these trays were printed from the L is for Leaves pack from Oopsey Daisy. 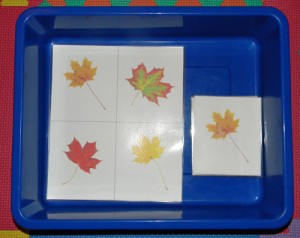 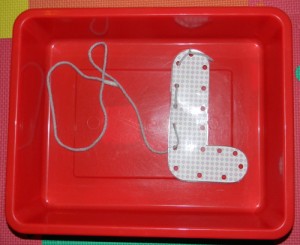 I also brought out a basket of nature blocks for Caden to play with. He  enjoys playing with these blocks and uses them with his trucks and in the sensory bin. 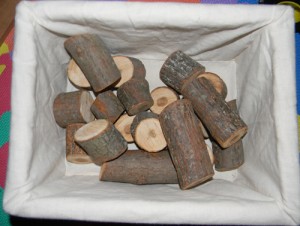