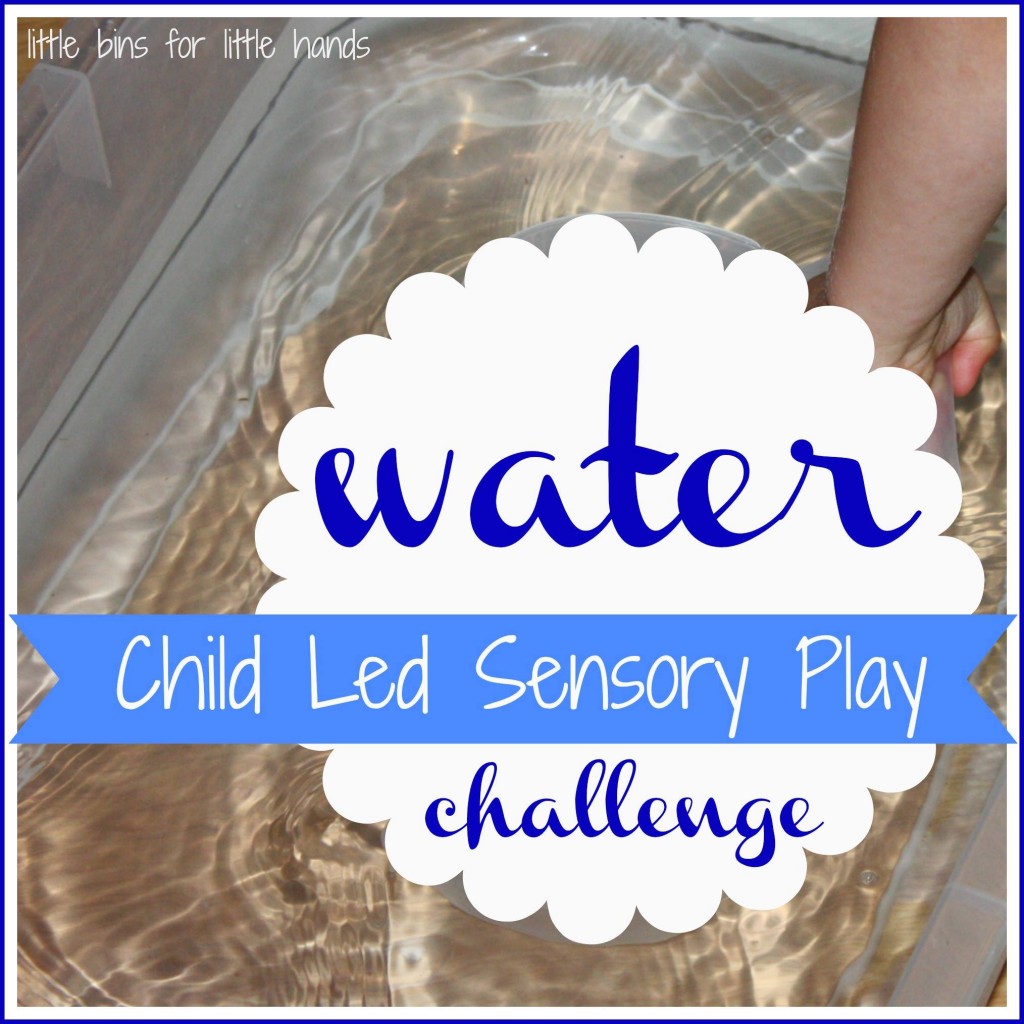 This is my first time participating in the Sensory Bin Challenge hosted by Little Bins for Little Hands. The premise of this challenge is to set up a bin of sensory filler such as rice or dirt and allow the child to lead the play instead of merely participating in the customary themed sensory bin. 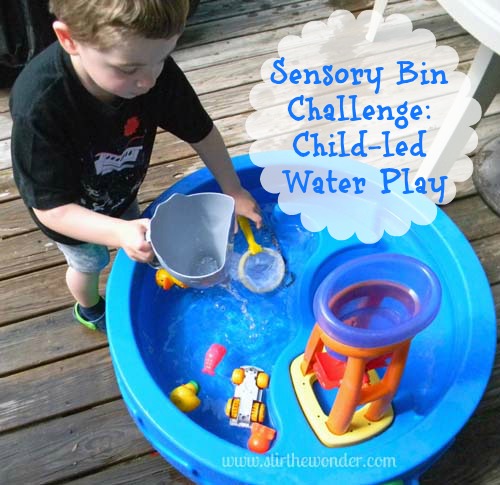 I was surprised to find this to be such a challenge as Caden usually loves to play with water. I thought it would be a breeze to simple give him a bin of water and let him play with it however he wanted. But we ran into hurdles with this challenge. I think it had a lot to do with the location of the bin. The first two times I tried to engage him in this activity I set it up in our yard. But each time we were quickly ran off by bugs! So the third time I set it up on our back deck! Worked like a charm! Caden had such a fun time playing with the water! 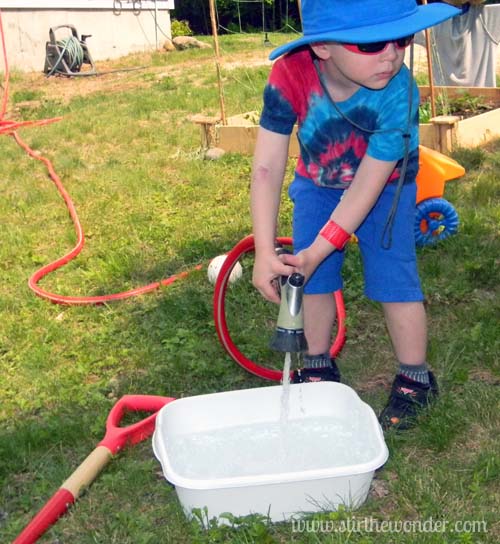 The first time we attempted this challenge, I placed a small bin in the grass and Caden had fun filling it up with the hose. But after I took the hose away he quickly lost interest and was scared away by bugs! 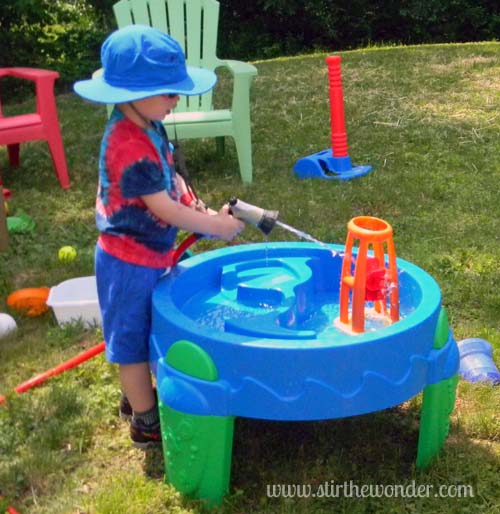 The second time we attempted this challenge, we filled up the water table. I thought maybe the small white bin wasn’t inviting enough. But the same thing happened with the water table. After the table was filled, he quickly lost interest and was scared away by bugs! Our yard is very buggy. 🙁

So coming up on this deadline, I decided to give it one more try. I moved the water table out of the grass and up onto the deck. This time it was a hit! Caden had so much fun with this child-led activity! 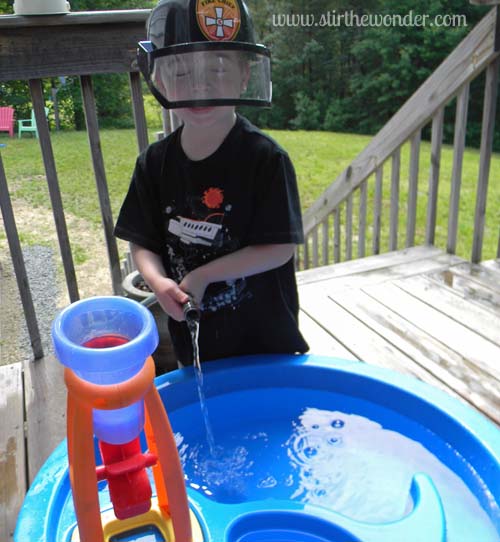 Caden decided he wanted to be a fireman! So as the water table was filling up I quickly ran upstairs and dug out his fire helmet and fire coat! (I did a lot of running around the house looking for the items he requested during this activity!) After filling up the table Caden got to work rescuing his rubber ducks. He also played with other bath toys that I brought out just in case he needed something else to rescue. 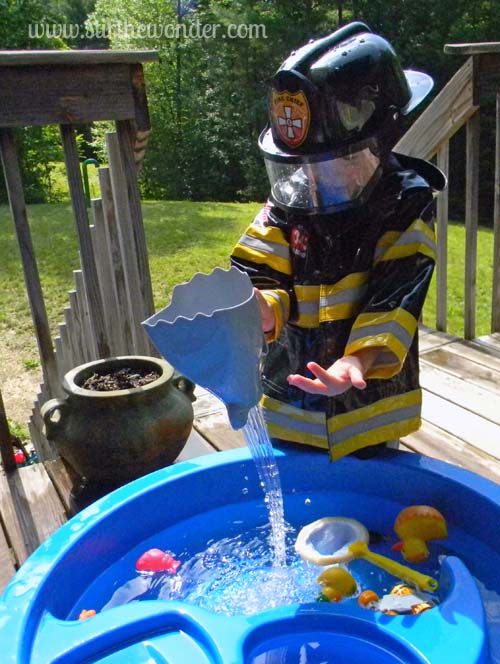 After rescuing all his rubber ducks, Caden decided he needed to cool off. It was a very warm morning. So he filled his fire helmet with water and put it on his head!

Then he decided his fire coat was too hot from sitting in the sun and it needed a good wash! This is when things got really interesting! He asked if he could put his fireman raincoat in the water table. I said “sure!” It is a raincoat after all, it can handle a little water. 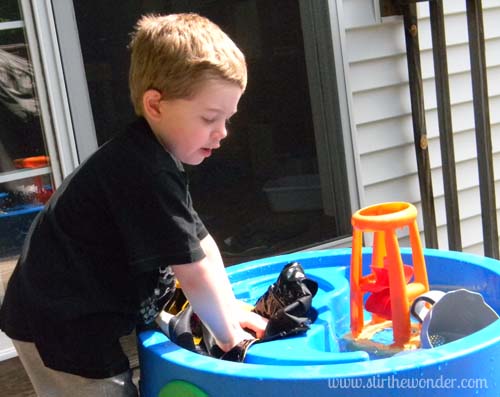 After washing his fireman raincoat and hanging it up on the deck rails to dry he started looking for other things to wash. He grabbed my socks which I had taken off because they were all wet. While he was doing that I grabbed some clean towels waiting to be folded on the couch and let him wash those in his water table. While he was busy washing, I ran into the basement looking for a rope to create a clothesline and grabbed some clothespins so he could hang his washing. 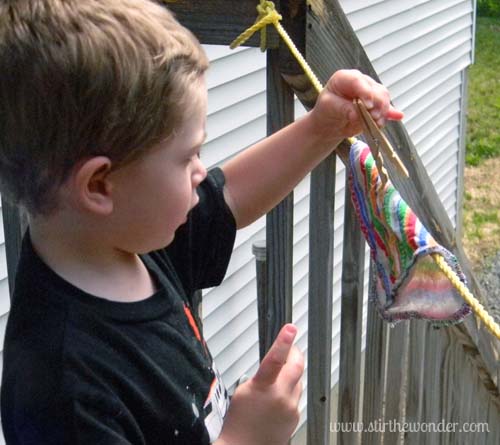 He really enjoyed this extension activity. I’ll share more about that in another post! 😉 For more child-led water play inspiration check out the other participating blogs below!

Are you up for a challenge?! Join us next month as we challenge our kids to play with sand!