It’s not too difficult for an active toddler to meet a gross motor challenge. Check out all the activities we did in one week’s time for week 2 of the Gross Motor Challenge!

Caden and I did much better with the Gross Motor Challenge this week. Partly because we made it to Gymboree, and partly because it was nice-ish outside this week. I am also counting all those afternoons of chasing the dog around the house.

Caden spends Monday’s with Grandma. Her house is much more roomy and Caden spends much of the day running from room to room chasing her little dog. (poor pup!) This Monday I was able to catch some photos of Caden crawling around, he actually started to do the army crawl and dragging himself across the wood floor, but when I tried to get him to do it again he just did a baby crawl. Caden also got me to help him jump (or boing as he calls it) across the room. 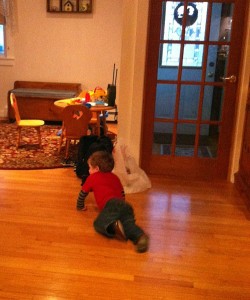 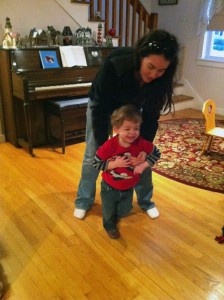 I apologize for the crappy phone photos. I did the best I could to clean them up.

On Tuesday we finally made it back to Gymboree after being unable to attend due to it being closed on the holidays. Caden loves to go to Gymboree to run around and climb on the equipment. 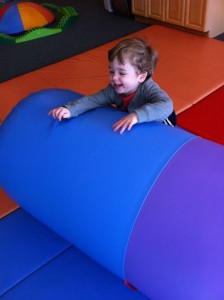 In this picture Caden is rolling a giant air log across the mats.

Wednesday was a nice sunny day with a high of 45F, which is quite warm for winter in New England. Caden and I went outside to play in the remaining snow. He enjoyed being reunited with his cozy coupe and running around with his mower. 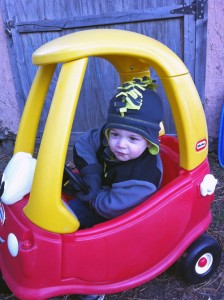 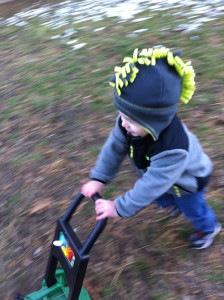 He also had fun going down his little slide and transferring snow around the yard. 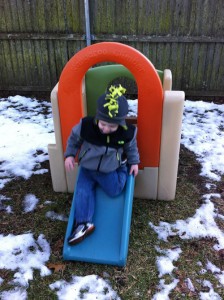 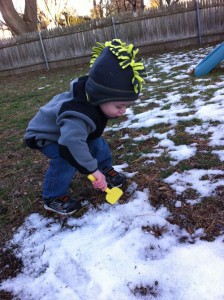 We spend many afternoons chasing the dog around the house or throwing his ball for him to catch. These two are a crazy pair! On Thursday or Friday (I can’t remember which, but most likely both days.) Caden and Tyson (the dog) ran circles around this room. Caden was laughing hysterically, while the poor dog tried to escape the maniac toddler! 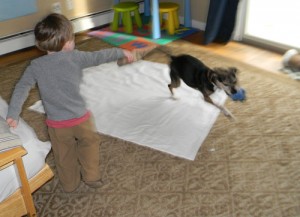