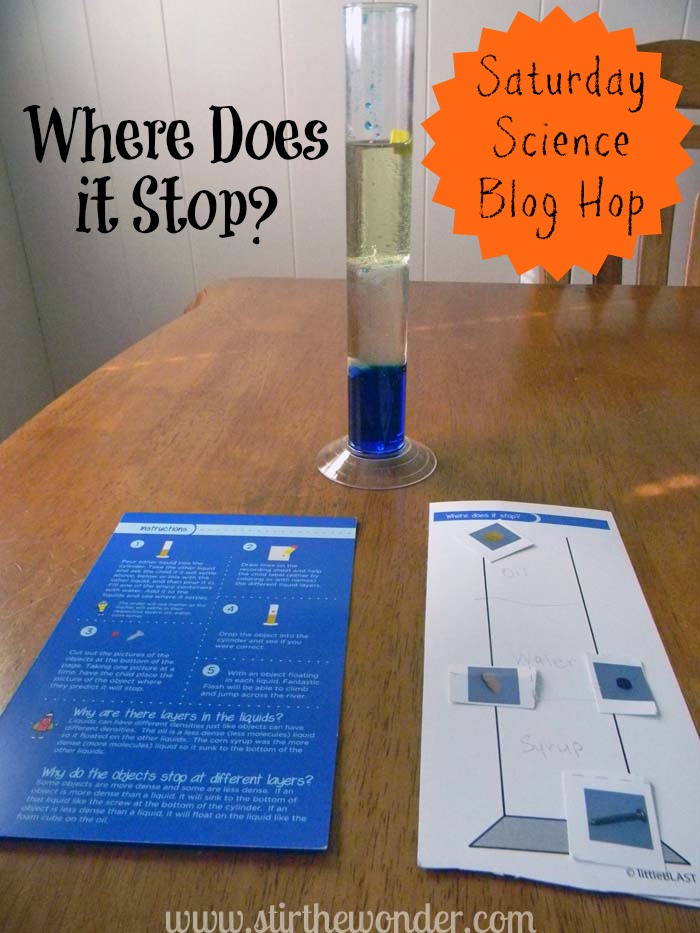 Where Does It Stop? Science Experiment

The Where Does it Stop? experiment is the third activity from our littleBLAST science kit we were given to review. You can read all about the first activity and our review here, and the second activityhere. We had a lot of fun with this really neat activity! The object was to guess whether the objects would float or sink, or where they would stop sinking in the graduated cylinder. I had never done an experiment like this before either, so it was all new and interesting to me too! 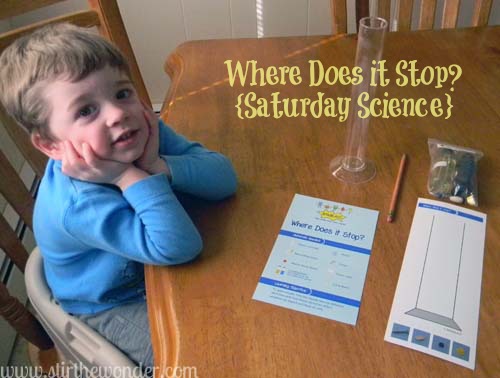 The kit included everything we would need to conduct this experiment, even scissors! It was so easy to set up and that is probably my favorite part! As you can see even Caden has gotten used to posing for the “set up” photo! 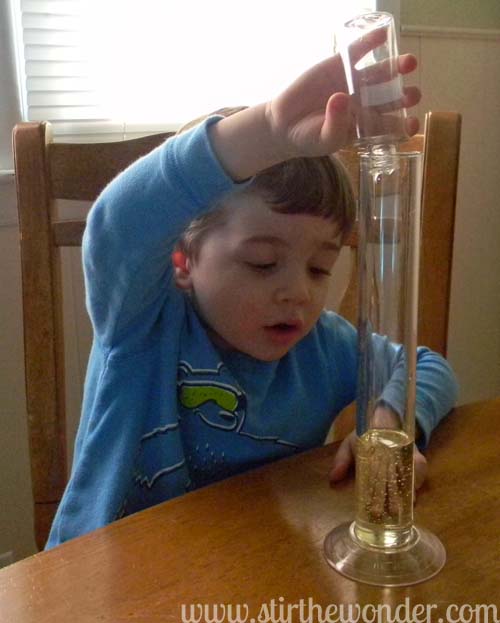 The first step to doing this activity is to pour in one of the provided bottles of liquids. Caden chose to empty the bottle of oil first.

Next we emptied the bottle of blue dyed corn syrup. Before we started pouring I asked Caden whether he thought the corn syrup would float on top of the oil, sink below the oil or mix in with the oil? It was so neat to watch the blue corn syrup drizzle to the bottom of the cylinder. As you can see Caden was completely awestruck! 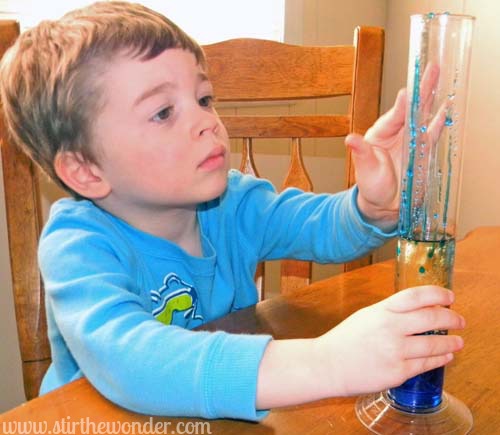 Next we filled one of the empty bottles with water and poured that into the cylinder. Before pouring in the water I asked Caden the same questions as before we pour in the blue corn syrup. After we poured in the water, we could see how the liquids were divided into three layers. We drew our observations on the handy worksheet provided in the kit. I say we, because Caden is only three and still doesn’t have a good writing grasp. I’m just impressed he didn’t try to scribble all over it! 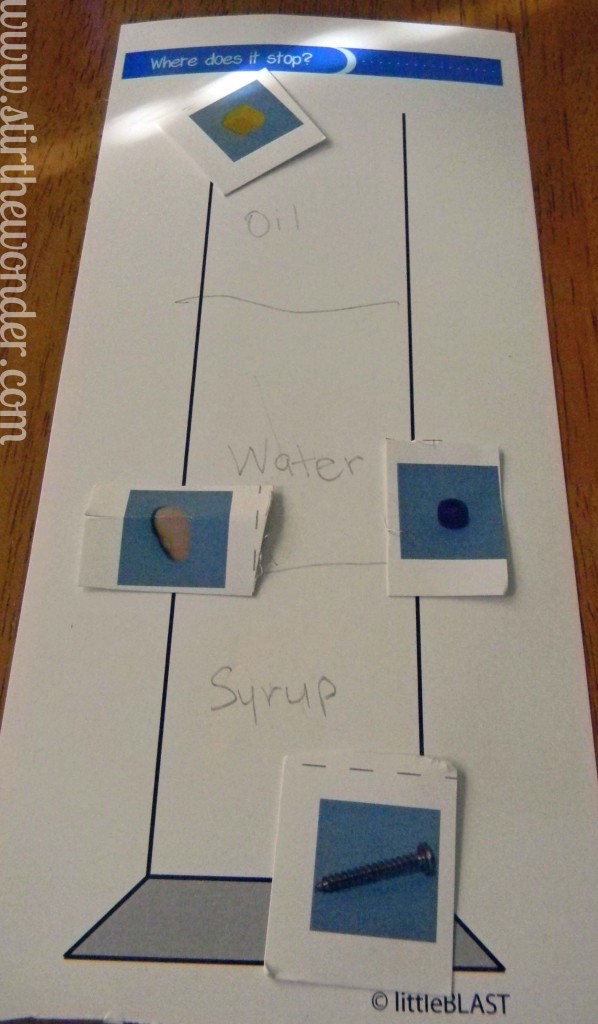 Then before we dropped in each object, I asked Caden where he thought the object would stop falling, and had him place the picture of that object on the picture of the graduated cylinder. Caden did well cutting out the little pictures with some help and placing them. 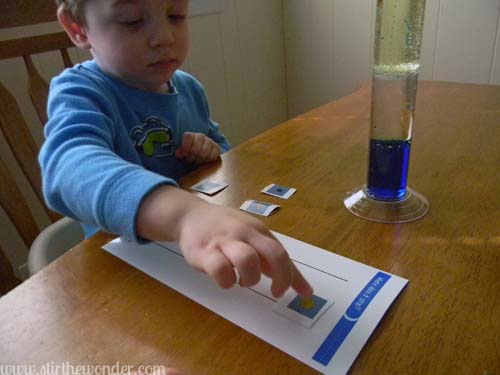 First up, was the tiny yellow cube of foam. The pictures I got of Caden observing the objects falling in the cylinder are so cute! I’m just going to share some here! 🙂 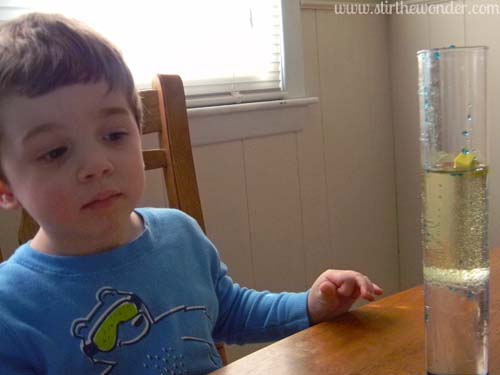 Observing the small screw fall to the bottom. 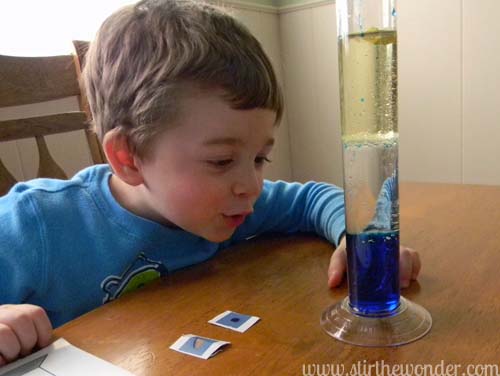 Watching with excitement as the bead slowly sinks toward the bottom of the layer of water. 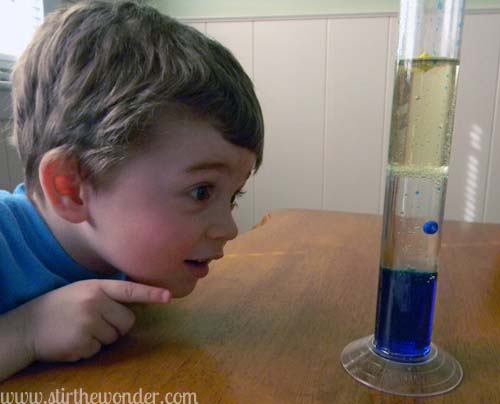 Watching with excitement as the bead slowly sinks towards the bottom of the layer of water. 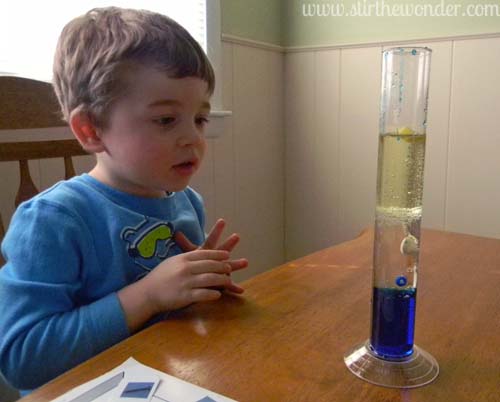 Watching as the white bean falls through the layer of water to settle near the bead. 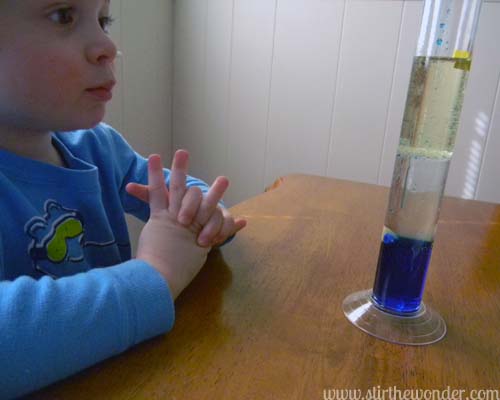 Checking out all the objects where they stopped in the graduated cylinder. 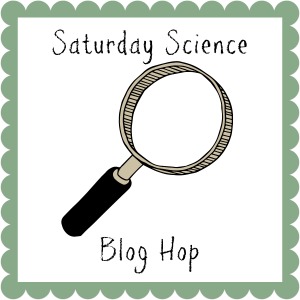 Celery Plant Experiment from P is for Preschooler

Checklist and Printables for Gardening with Kids  from Lemon Lime Adventures