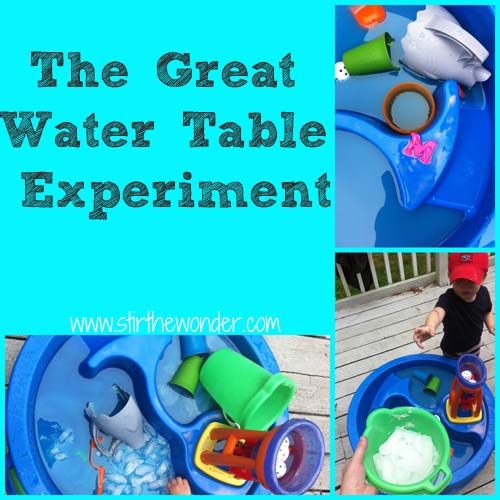 The Great Water Table Experiment was a totally spontaneous activity! It was a comfortable morning and Caden asked to play with the water table so I thought I would make it a little more interesting by adding some food coloring & corn starch with the idea that it would become a large vat of goop. I didn’t have enough corn starch for the amount of water I put in the water table so it didn’t really work the way I had hoped. But it doesn’t matter because Caden had fun anyway! 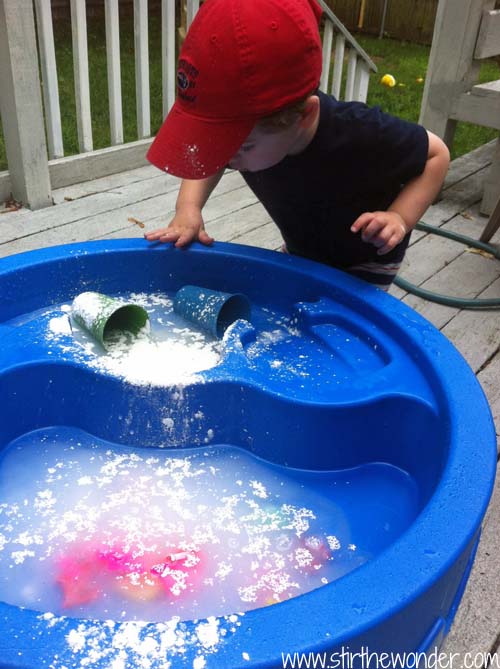 Caden directed most of the water table play, I was merely his assistant. I gave him the box of corn starch to put in the water table, then I added some food coloring and mixed it all up. I put red food coloring in one side of the table and blue in the other. It was interesting to watch Caden mixing up the two colors to create a new color. 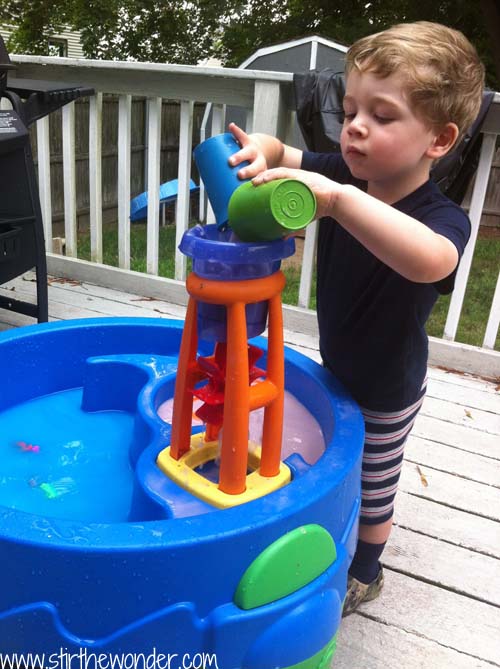 I had added some alphabet magnets to the water, but Caden ignored them for the most part. He was much more interested in pouring the water and mixing the colors. (The water looks milky because of the corn starch. Which made the bottom of the water table slimy.) 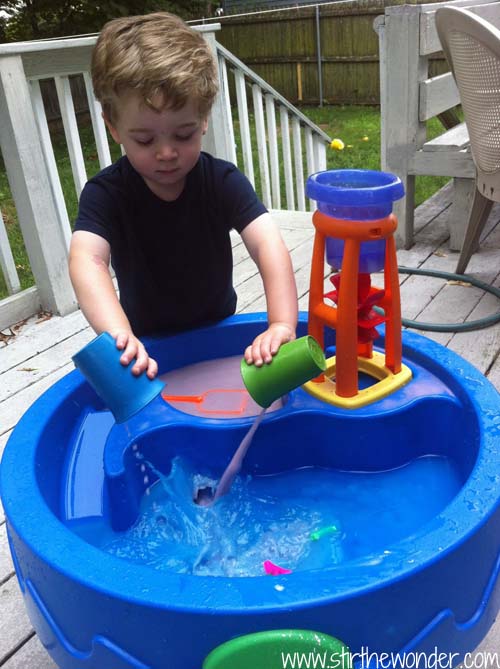 He experimented with various methods of pouring and different containers. When I noticed Caden getting bored with the supplies he was using, I added something else to the table, such as little plastic balls and a sand shovel. 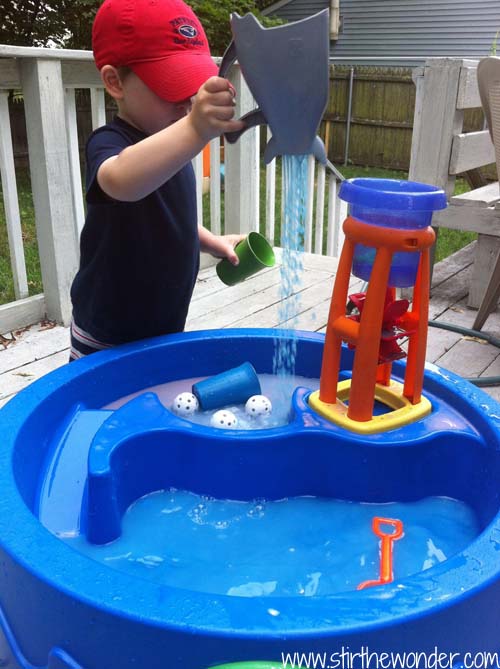 And then Caden had the brilliant idea to add ice cubes! So I grabbed the sand pail and off we went into the freezer for a bucket of ice! It is so much fun to let him be creative and to see where his mind is going! 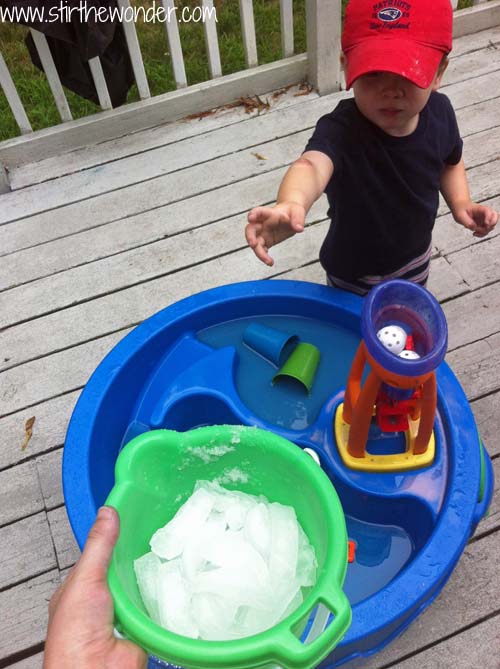 Caden dumped in the bucket of ice and then of course ate a couple of cubes! Thankfully everything we used in the water table was edible. 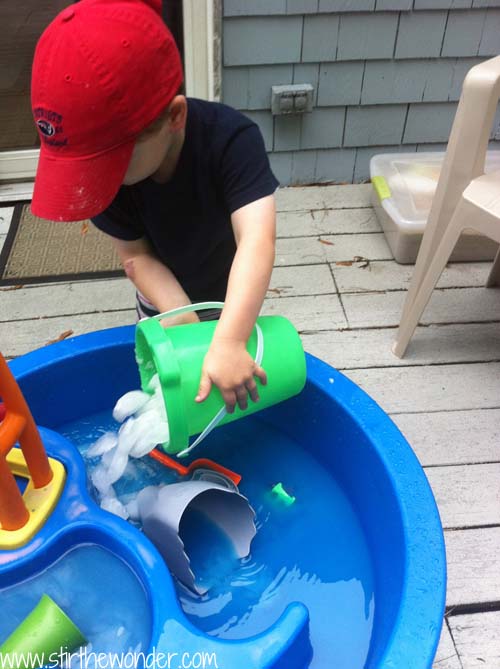 He loved putting his hands into the icy water and mixing it up. 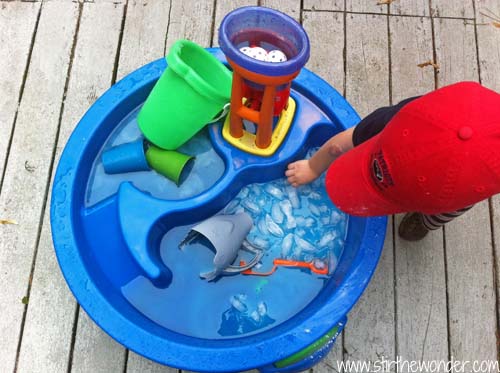 Then Caden experimented with different methods of scooping up the ice cubes. First he tried the sand shovel and then a plastic cup. 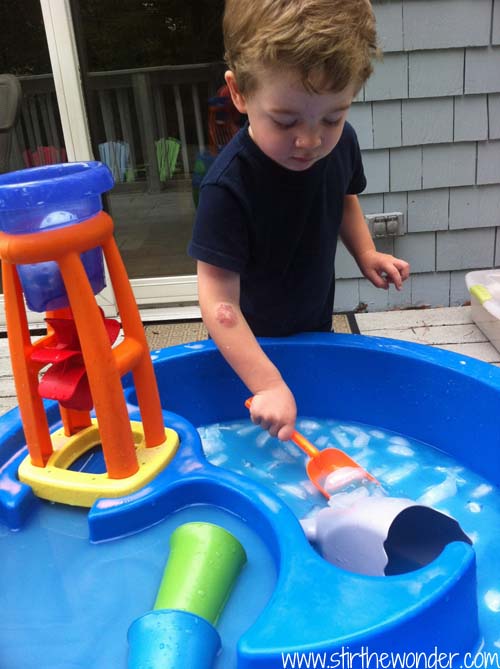 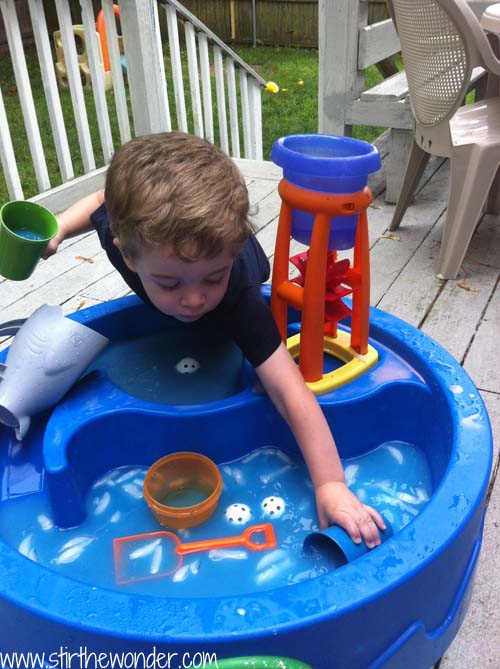 Towards the end of his experiment I started pulling the magnet letters out from the bottom of the water table and put them on the edges of the table naming the letters as I found them. That is when Caden surprised me by correctly identifying the letter ‘M’ by sound. He said “mmmm…” and then “muffin”. I had no idea that he knew any of his letters, but apparently he has soaked in knowledge all along.

I took a picture of the letter ‘M’ because I wanted to remember that moment. It was so cool to realize that kids can learn without being formally taught. It has taken me a while to realize this, but now I really am a believer in natural learning.

You can expect to see more posts like this as we explore learning in a natural and playful way. I do not plan on using any curriculum but rather gather ideas and materials from various sources and make them available for Caden to do if he in interested. I hope to organize the playroom into centers like you see in preschools, so that he can work on all the skills he needs to succeed in life. We will also being going on field trips, exploring nature and working around the house and yard.