Are you struggling to teach your preschooler the letters on the alphabet? Have you tried different activities, crafts and curriculum without much luck? I had such a hard time teaching my son all the letters. I think part of our problem was lack of consistency, but also his lack of interest. But then I finally found the one thing that made it all click for him and he was able to learn all the letters; upper and lower case, plus letter sounds in a couple of months! Do you want to know what the one thing you need to teach preschoolers the alphabet is? It’s so simple, I can’t believe I didn’t get one sooner!

The One Thing You Need to Teach Preschoolers the Alphabet

The one thing, more than the many alphabet activities we did, and curriculum we tried that really helped my son learn all the letters of the alphabet is an alphabet placemat! So simple right?! These affordable little mats can teach your preschooler the alphabet while protecting your table from scratches, dents and marks!

My son loves animals so he really enjoys the placemats with pictures of animals. He uses the pictures as clues when he gets stumped to help him figure out the letter name.

How to Teach the Alphabet using Placemats

All you need to do is go over the letters or sing the alphabet song if you’d like, while pointing to each letter. Do this once a day before meals, snacks or schoolwork and before you know it, your child will be naming all the letters and telling you the sounds they make!

You can also make up simple games to play with your preschooler using the placemats to help solidify letter recognition in a fun way! 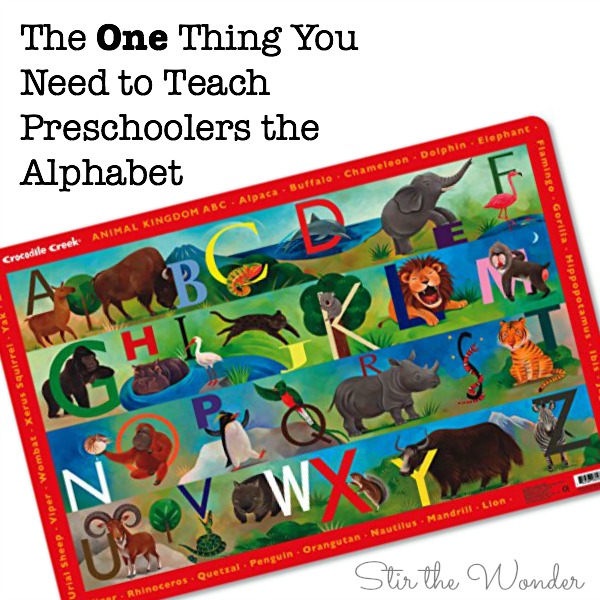 Along with reviewing the letters each day, we also played some fun games using an alphabet placemat and snacks! Learning with snacks is so much fun for kids! I’ve found that this is a great way to get resistant kids interested in learning!

One simple game we played with snacks and an alphabet placemat is to scatter a snack like Cheerios or Goldfish crackers all over the placemat and have my son name the letters the snacks landed on before he ate it!

Another fun activity is great for reviewing upper and lower case letters is to use alphabet snacks like Scrabble Cheez-It or alphabet cookies and match them up with the letters on the placemat!

Do you have a fun way to encourage learning with placemats? Please share in the comments below!