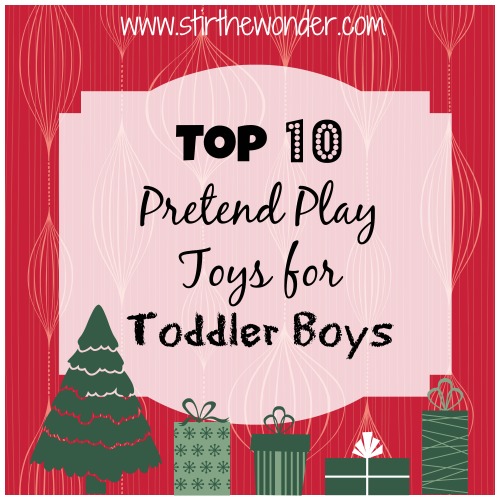 This week we are sharing our top 10 pretend play toys! Caden loves to play pretend  now. And every once in a while I can hear him having conversations with his toys or acting out a scene from a movie or TV show with his toys. It’s so cute! Here are his top ten favorite toys to pretend with! 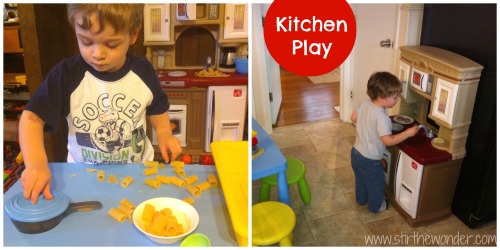 Last Christmas Caden received this Step2 Lifestyle Fresh Accents Kitchen set from his grandparents. He has enjoyed playing with it all year-long. We also have a Green Toys Chef Set. I like Green Toys because they are made out of recycled milk jugs and they make some really great gender neutral toys for kids!

Caden loves to play outside and over the last two years we have collected a good amount of garden tools, buckets and other pretend play toys. Caden loves to pretend to dig a garden and mow the grass. We have some basic sand shovels and buckets as well as a plastic set of tools including a rake, shovel and hoe. We also have this Little Tikes Gas ‘n Go Mower that Caden really enjoys pushing around the yard.

Caden LOVES to play with his cars! Can you tell from that picture? He gets a new little car almost every week! (He knows right where they are in the grocery store…) It doesn’t matter to him what brand we get, just that they are cool and different from what we already have. 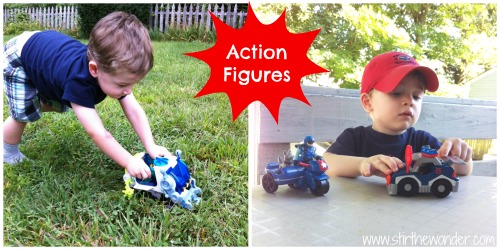 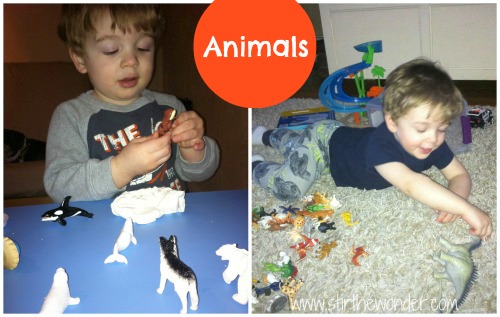 We have been collecting Safari Ltd mini animal toobs for about a year now. We just love them! Caden likes to dump them all out and play with them. They are also great for setting up a small world scene to play with or to add to a sensory bin like this Insect Sensory Bin or this Ocean Sensory Table.

Like his little animals, Caden also enjoys playing with his dinosaur figures. He pretends to make then crash & smash, fight each other and eat. We have a handful of larger dinosaurs as well a the miniature dinosaurs from Safari Ltd.

Caden was on a train kick for a while and really enjoyed playing with this wooden train set from Target. This is a great set for beginners and toddlers who have fickle interests. We also have various non name brand train cars as well as some well know Thomas train cars. He still enjoys playing with his trains although not as much as his cars or action figures. 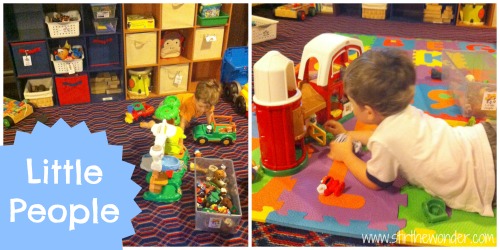 Caden has loved his Little People Barn since he first got it for his first birthday. He loves to take the animals, put them in the barn and make their noises. He also loves to play with his Little People Zoo (we call it a jungle) and the extra animals we have, the School Bus, and Helicopter.

Give this boy a truck and he will be happy for a long time. He loves to play outside with his large Tonka trucks. We have the classic metal Tonka Dump Truck, these things last forever! My brother’s old Tonka Dump Truck is still around, it’s a little rusty but Caden loves to play with it at Grandma’s house. We also have an older Tonka Rescue Jeep similar to this one, that was handed down to use from my Aunt. He loves to push that truck around the yard and have races with the dump truck. Caden has also been playing with my brother’s old ertl red metal tractor and wagon.

For more Top Ten Holiday Lists please check out these posts from my co-hosts!

And check back next Tuesday for another Top Ten Holiday List! 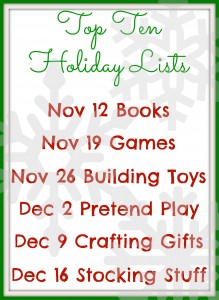