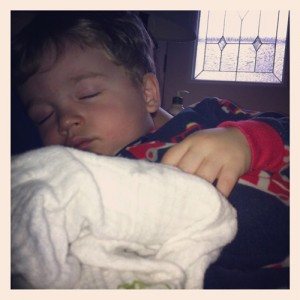 This week Tot School started out slow due to a certain someone not sleeping well and waking up way too early in the morning. But we did make it to the library and got a couple of art projects in too.

This week we continued the pumpkin theme, and I’m sure there will be more pumpkin related activities up until Halloween. On Monday, I pulled out a Do-a-Dot printable from Homeschool Creation’s Fall Fun Preschool Pack and gave Caden an orange dot marker. It surprised me that Caden was interested and he actually got the hang of it, finally! But he was still more interested in the cap and the spongy end. 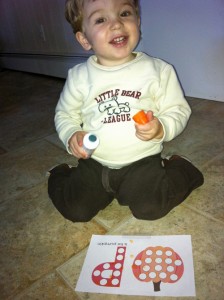 On Tuesday we went to the playground and library. I left extra early in case Caden needed to nap in the car, but he didn’t. So we played on the playground for a little while and then headed inside. We were so early no other kids were there. Caden was asking where all the other kids were. Finally some kids came, and Caden even seemed interested in playing with a little girl about his age. This was the first time Caden seemed socially aware of kids around him. He even sat next to a little boy, on the same chair while they played with the same toy. Caden is also learning about sharing. The library has a pet guinea pig which Caden always says hello to, but on Tuesday the librarian got her out of the cage and Caden was very excited to pet her. Caden attempted story time this week, but only stayed a few minutes while singing songs, then he was ready to leave. While at the library we also picked up a bunch of pumpkin themed books to fill our book bin. 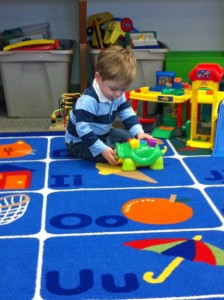 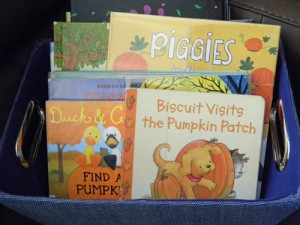 Later on Tuesday afternoon, Caden and I played a pumpkin matching game from the 2 Teaching Mommies Pumpkin Tot Pack. Caden also played with a shape stacking toy that we borrowed from the library. Caden is very good at playing the matching games, but he needs more practice using his fine motor skills so he can get better with stacking. 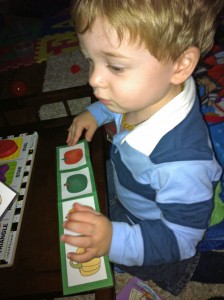 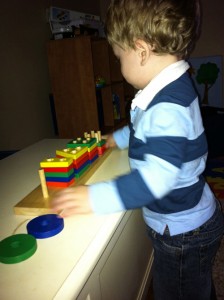 We did two pumpkin art projects this week. First we painted a pumpkin. I used acrylic paints so the paint doesn’t flake or rub off. Caden didn’t want to wear a smock, so I turned a sweatshirt and sweatpants inside out. That way if he got any paint on it (which he did, but not much) and it didn’t wash out, it would only be on the inside. Caden really enjoyed painting the pumpkin. 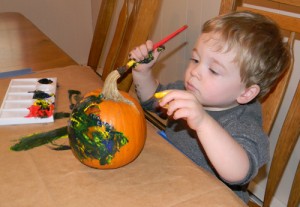 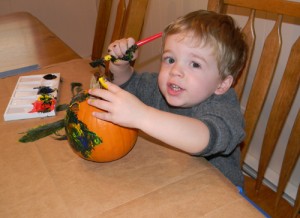 I also attempted to do a pumpkin stamping art project with Caden. The final product didn’t turn out like I expected, I think I should have used different paint. But he had fun and that is what matters. 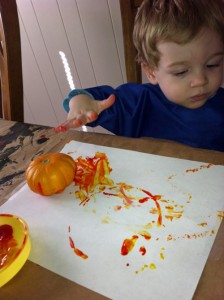 One night before bed, Caden was playing with his shape puzzle. He was able to correctly match up several shapes and even said “circle”. Lately Caden has added a new word to his vocabulary almost everyday, it is so much fun! 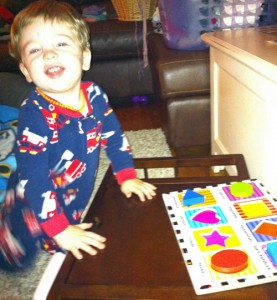 We also had a lot of fun with play dough this week. On Friday I set Caden up at the kitchen table with blue play dough and some Halloween cookie cutters. Earlier in the week, we played with homemade play dough as part of the Virtual Book Club for Kids. Watch for that post soon. 🙂 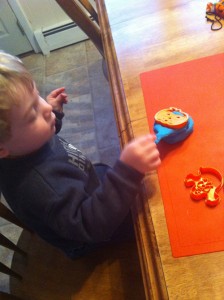