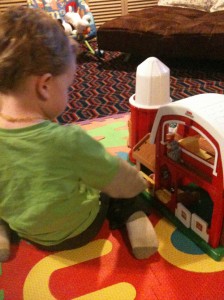 This week was a slow week for Tot School as Caden was a little under the weather with a cold. We didn’t make it to the library or the Providence Children’s Museum as planned. Many of the pictures in today’s post were taken with my phone. I apologize for the poor quality.

Despite his cold, Caden surprised me a few times this week with a new skill and his willingness to learn. I’m not sure if this had to do with his low energy due to his cold, his increasing maturity, or some changes I have made in the way I present the activities. Either way, I’ll take it!

The first change I made in regards to Tot School, is to move it upstairs. Previously I was attempting to keep these activities downstairs in our finished basement, but he just wants to play with his other toys downstairs and wasn’t interested in planned activities.  Another reason I am moving it upstairs is because it is easier for me upstairs, where I have access to the kitchen sink and other supplies for easy clean up. We also spend most our time upstairs and it is just easier to fit Tot School into our routine throughout the day. 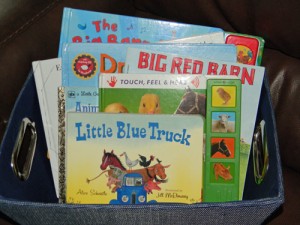 I started the move upstairs by creating a book bin with thematic books in it. We have tons of books on shelves, and Caden looks at them from time to time, but with a bin on the couch he is more likely to grab one and look through it. All of these, except for one from the library, are Caden’s farm themed books. I guess we like farms! 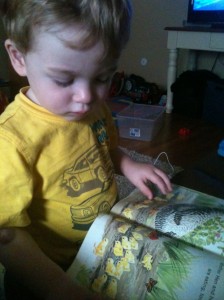 I have also found that Caden is more likely to be interested in a planned activity if he is sitting in his booster at the kitchen table. Caden did a few activities at the table while I was preparing lunch or after dinner.

He surprised me with his interest in a farm themed Montessori matching game, and I was even more surprised that he understood the concept and was able to correctly match up the images. He did get a little frustrated, but I think that was more about his ability to place the cards on the board. After a few matches he would toss the board. Now that I know he is interested, even for just a few minutes, and is able to correctly play the game I will definitely be including these types of games in my plans.

Caden also colored a printout from 1+1+1=1 at the table, and looked at the farm themed flashcards from Lawteedah a few times during the week after lunch or dinner.

For our farm themed art project came from 2 Teaching Mommies. Caden made a shapes tractor, with a lot of help from Mama. He was really interested in the glue stick and kept pulling up the shapes we had just glued down. But he really liked his tractor art and pointed to it hanging on the pantry door all week saying his version of “tractor”. 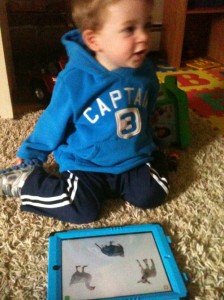 He also really liked a farm app I downloaded on my iPad for him. It is developed by GrasshopperApps.com and is called Preschool Games- Farm Animals by Photo Touch. Caden surprised me by successfully identifying the farm animals, including some new ones.

Caden’s vocabulary has gained some new farm themed words in the last two weeks. Including, “chicken”, “tractor”, and “cow”.

Besides our farm themed activities, Caden worked on some fine motor skills. Early in the week Caden attempted to lace a large bead onto a shoestring. He wasn’t able to get the string through the hole, and quickly gave up frustrated, but I’m impressed that he tried. 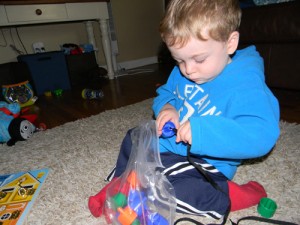 These beads are part of a peg board set that we borrowed from the library. A couple of weeks ago I learned that our local library has a toy lending closet full of educational toys! I am so excited to be able to borrow new toys for Caden to try, and will definitely be borrowing more in the future.

Other fine motor activities that Caden worked on was his Melissa and Doug Latches Board. We have had this puzzle for a while now, and he is getting really good with some of the latches. We worked on this for a while before nap one day, hence the tired face. And he was sitting in my lap, which is why the picture is at an odd angle. 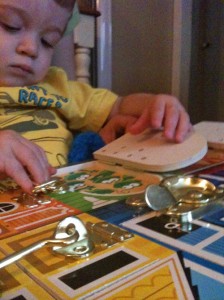 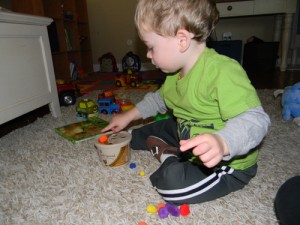 Caden also played with his puff balls and tub with holes in the lid.

This week Caden also worked on some practical life skills. He was drinking from my glass and wanted to do it himself, so I got him a plastic cup and put a bit of water in it and let him drink from it himself. He did really well gently placing it back on the table between sips and didn’t spill any, only a little dribbles out the sides of his mouth while drinking. 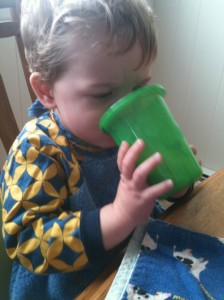 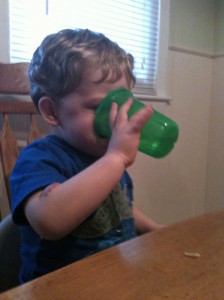 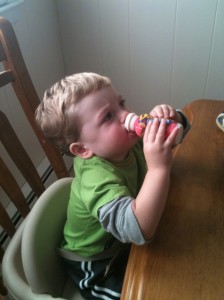 Later that day, Caden was a pro, drinking from a cup one-handed! lol! And later in the week, Caden successfully drank a smoothie from a bottle. All by himself!

Another practical life skill Caden enjoys, is helping me fill the dog’s bowl with food. He has helped me with this for a couple of weeks now and has gotten so much better. He really enjoys feeding the dog, and often goes to the pantry door and asks to feed the dog “food”. 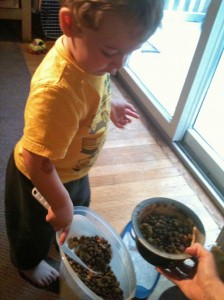 Other random activities I included as tot school this week was a bath with foam alphabet puzzle pieces and playing with his LeapFrog Fridge Wash & Go Magnetic Vehicle Set at Grandma’s house. Caden surprised me by matching up several cars and with his ability to fit the pieces into the correct spot. We have the similar LeapFrog Fridge Farm Magnetic Animal Set at home and I was not aware that he could correctly match up the pieces. 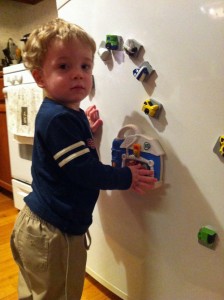 Don’t forget to check out my other farm themed posts!

Tot School: On the Farm and Field Trip: Dairy Farm