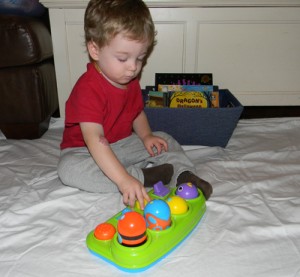 This was another light week for Tot School. Mama wasn’t feeling too good. It seems I got the cold Caden had last week, only worse. Caden mostly played with is toys, or I am ashamed to say, watched more TV than usual. But I did get some pumpkin themed activities in there when I was feeling up to it. 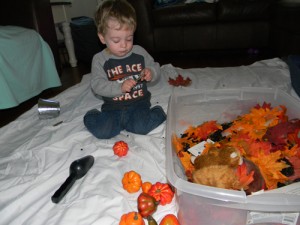 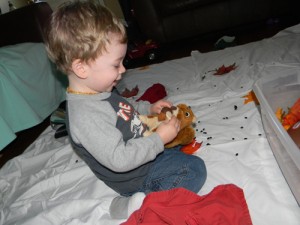 Caden enjoyed an autumnal sensory bin that I created at the end of last week. I used the Red Leaf, Yellow Leaf sensory bin and added black beans, artificial pumpkins, felt sticker pumpkins, real acorns, a scoop, bucket and some fall themed flash cards from our Little Einsteins Seasons Discovery flashcards pack. Caden like to toss the leaves in the air and spread the beans everywhere. He also used the scoop and bucket and even “feed” the squirrel some beans. It was so cute! 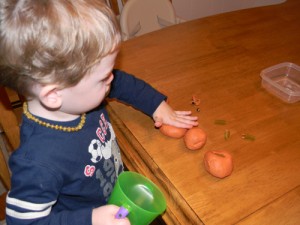 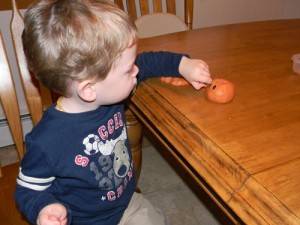 I also got out the pumpkin spice play dough that we had made earlier in the season. I gave him some beans and green pasta to create little pumpkins and jack-o-lanterns. Caden was more interested in squishing the play dough between his fingers, but he also enjoyed sticking the spiral pasta and beans into the play dough balls that I formed for him. 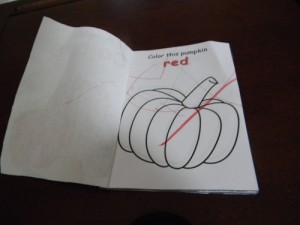 Caden colored a little in his Pumpkin Colors mini book that I printed out for him from the 2 Teaching Mommies Pumpkins Tot Pack. But he isn’t interested in sitting too long to color all the pages, so I was only able to get him to color the red pumpkin and I think Daddy helped him color some other pages on a different day. I think I will keep the crayons and this mini book out and see if he is interested in coloring some more next week. 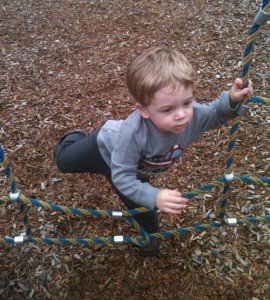 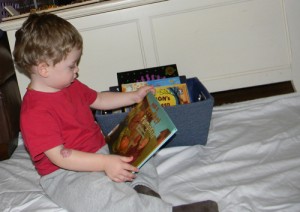 Even though I wasn’t feeling well, I did manage to get Caden to the library and playground a couple of times during the week.  I brought him to our usual storybook time at the library, but he was not interested in sitting with the other kids to listen to stories, so we just played in the library and got some books to fill our book bin. 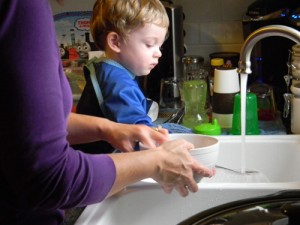 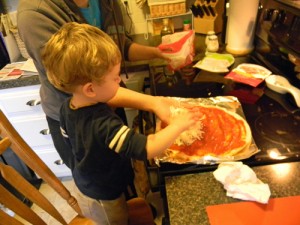 We also spent some time working on practical life skills. Caden really enjoys working in the kitchen and usually asks to help out. This week while Grandma was over, Caden asked to wash the dishes in the sink and Grandma obliged. He spent a good half hour washing the same dishes over and over again. And by wash I mean play with the soap and water with the dishes. 😉 Later that day, Caden helped me to make pizza for dinner. Since we had already made pizza together the other week, Caden remembered the sequence of ingredients and was a great helper!